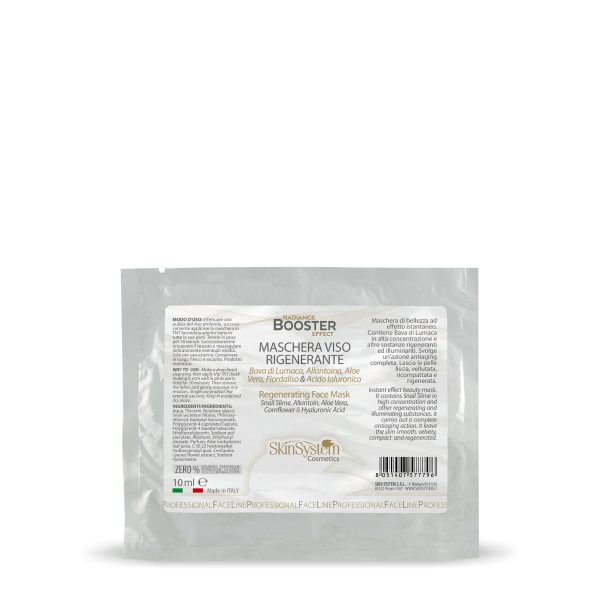 Instant effect beauty mask. It contains Snail Slime in high concentration and other regenerating and illuminating substances. It carries out a complete antiaging action. It leave the skin smooth, velvety, compact and regenerated.

Instant effect beauty mask. It contains Snail Slime in high concentration and other regenerating and illuminating substances. It carries out a complete antiaging action. It leave the skin smooth, velvety, compact and regenerated.

The snail slime Helix Aspersa is a concentrate of substances with antioxidant, nourishing and moisturizing action. High concentrations of Lactic Acid, Collagen, Elastin, Glycolic Acid, Allantoin, Peptides, Vitamin A and E, contrast cellular aging, the harmful effect of free radicals, reducing and / or making the signs of aging such as wrinkled, sagging skin and spots less evident. It regenerates the epidermis making it softer and more elastic. It purifies, tones and illuminates.

Particularly rich in flavonoids and other antioxidants, it counteracts the harmful effect of free radicals by slowing down the tissues degeneration. Anti-reddening, soothing and decongestant, it stimulates the functionality of the microcirculation, regulating the permeability and protection of the capillaries’ walls, preventing their fragility. Thus it is a valid adjuvant in the treatment of particularly sensitive skin affected by couperose

A fundamental molecule for the health of the dermis. Rich in antioxidant, soothing, moisturizing and repairing substances, it protects the skin from the harmful aggressions of free radicals, preventing normal skin aging. It nourishes it in depth and stimulates its physiological cellular self-regeneration, keeping it young over time.

Aloe Vera, particularly rich in A B C E vitamin, minerals and other substances essential for the health of the dermis, plays an important moisturizing, regenerating, antioxidant and immunostimulatory action.

In this special formulation, hyaluronic acid is easily absorbed by the connective tissue facilitating the reparative and reconstructive process. Placing itself in the connective space of the amorphous matrix in the form of an aggregate reticulum able to absorb and store a large number of water molecules, it guarantees the degree of hydration, turgidity, plasticity and viscosity indispensable for the maintenance of a young skin. As a shock-effect molecule, it compacts tissues, remedying the signs of aging and preventing cells’ damage directly from inside the tissues.

Make a deep facial cleansing, then apply the TNT mask making it stick well in all its parts. Hold for 10 minutes. Then remove the fabric and gently massage any residues. Single-use product. For external use only. Keep in a cold and dry place.