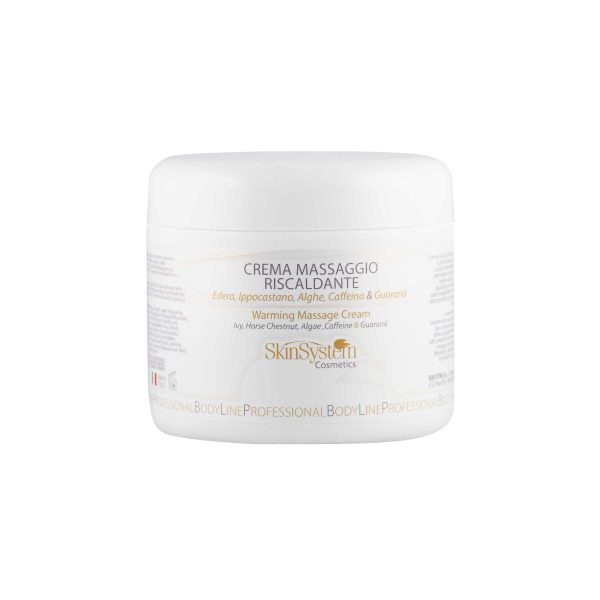 Cream rich in plant extracts active against skin imperfections due to localized Cellulite and adiposity. It has a strong heating action during the application to allow a greater and cacia to the assets. Leave the skin soft, smooth and toned. It is applied in modest quantities with a gentle massage, insisting on the most injected parts with imperfections. It is absorbed quickly and thanks to its balanced formulation it has a high yield and application speed.

Massage cream rich in specific active physiotherapeutic extracts indicated in the prevention and treatment of skin imperfections of cellulite and localized adiposity. The warming action produced during the application of the product, allows a greater absorption and effectiveness of the active ingredients. Thanks to its balanced formulation and to its high fluency, it is the ideal product in specific massages for the treatment and care of problematic cases of localized fat and stagnation of liquids.

IVY
Its astringent action promotes the reabsorption of excess fluids that permeate the subcutaneous tissues, facilitating venous microcirculation and toning the tissues

HORSE CHESTNUT
In cosmetics the horse chestnut seeds extract is used for its vasoprotective, anti-inflammatory and draining properties. Particularly suitable for treatment of lower limbs blemishes, such as edema, cellulite and microcirculation’s defects.

GUARANA’
The Cuban Paullinia, commonly called Guaranà, is an Amazonian shrub that contains choline, catechins, tannins and caffeine. Substances that stimulate thermogenesis, a process by which an increase in energy consumption is determined, helping weight loss. The thermogenesis induced by cosmetic oils and supplements based on Guarana stimulates the adipose tissue and promotes the melting of localized fat deposits.

CAFFEINE
Caffeine plays an important lipolytic action, breaking down the fat contained in fat cells. It gives elasticity and plasticity to the skin, improving its tone and reducing its localized fat deposits and the annoying “orange peel” effect.

ALGA LAMINARIA
The laminaria alga is considered the sea alga par excellence with important stimulating and reducing properties. Thanks to the enormous intake of iodine, it stimulates thyroid activity accelerating fat metabolism, thus promoting the movement of interstitial fluids and gradually reducing cellulite blemishes. It restores tone to the tissues with visible results from the very first applications. Valid and effective aid in the prevention and treatment of imperfections related to localized fat.

CARNITINE
It carries out an important slimming and firming action, thanks to its vessels protective and anti-edematous properties in association

Take the required amount of product. Massage with circular movements the part affected by blemishing. Proceed with the most appropriate massage technique.